Happy Friday! We have such a cool engagement session from Dawn Sparks for you this morning – the only thing that could make it better is throwing ‘Take My Breath Away’ on repeat while you’re enjoying the photos.

Happy Friday! We have such a cool engagement session from Dawn Sparks for you this morning – the only thing that could make it better is throwing ‘Take My Breath Away’ on repeat while you’re enjoying the photos.

Groom-to-be Chris is a pilot so when he, his fiancé Carolyn and her sister, Allie (who’s helping plan their wedding) were plotting where to stage their shoot, the airport came up as a no-brainer. What I love is that they went totally glam, giving it an old-school, romantic vibe that makes you wonder what city they’ll be dining in tonight (and it sounds like it’s not that far-fetched that they might jet off to San Francisco for the evening!). Then about halfway through they pull out the aviators and really Top Gun it up – you can tell this is a couple that is having a great time together…

Carolyn gives us the scoop on their very romantic engagement – be sure to check it out after the photos! 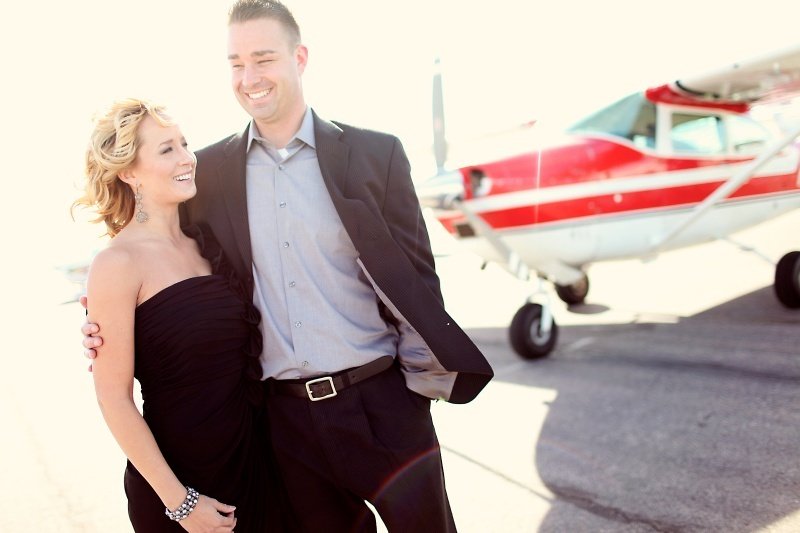 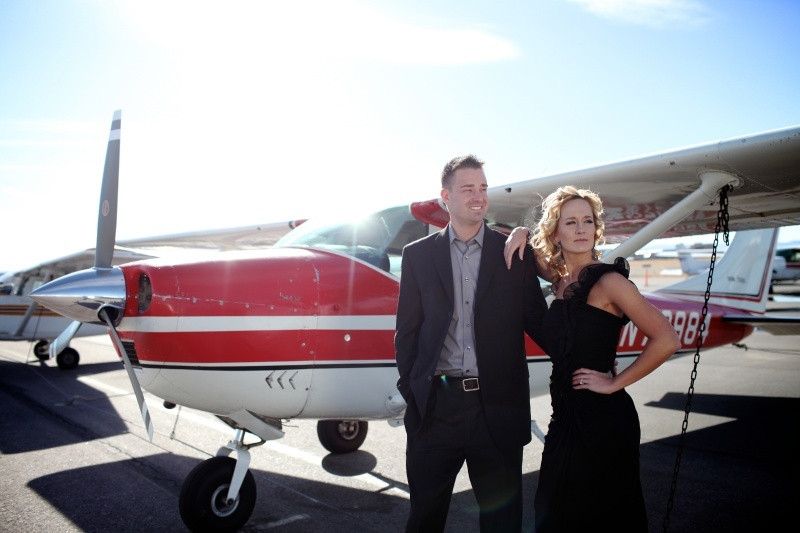 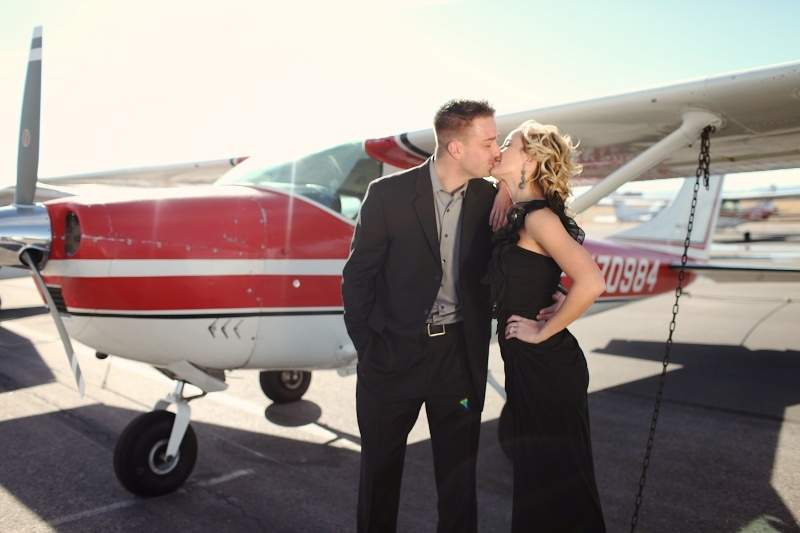 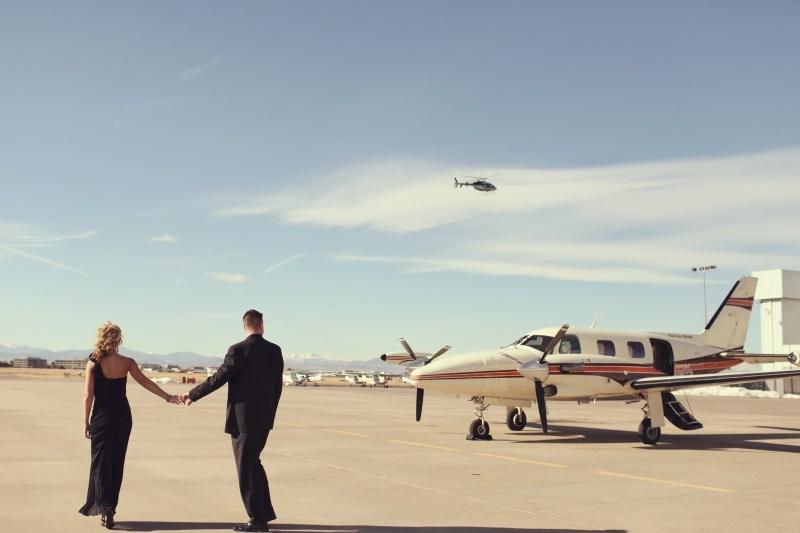 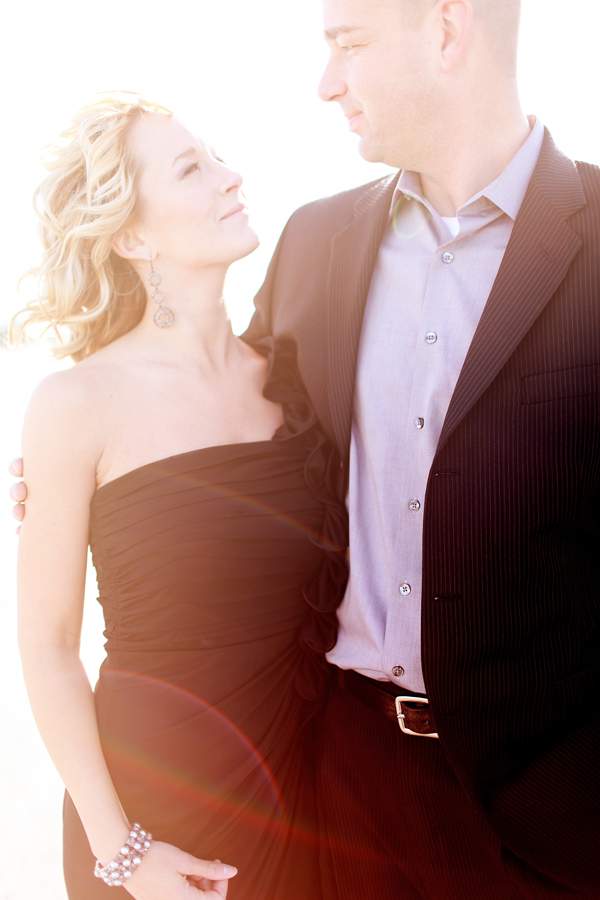 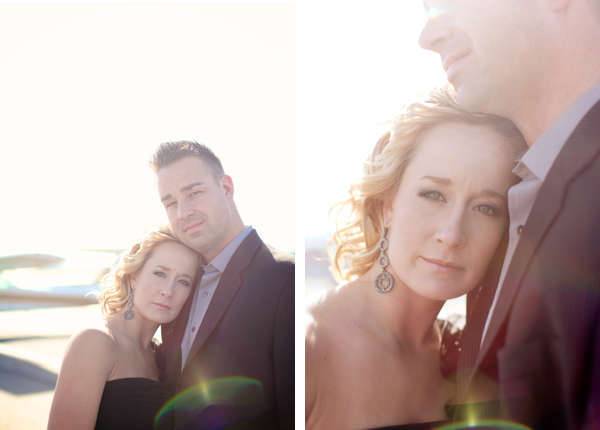 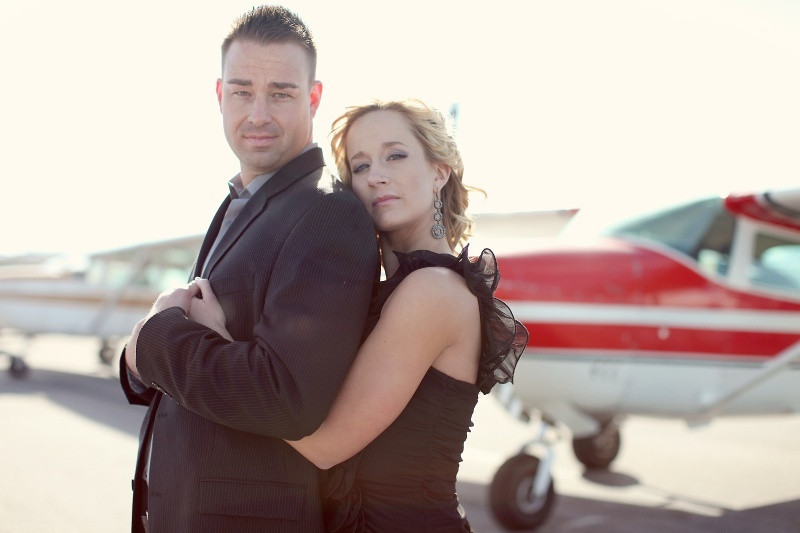 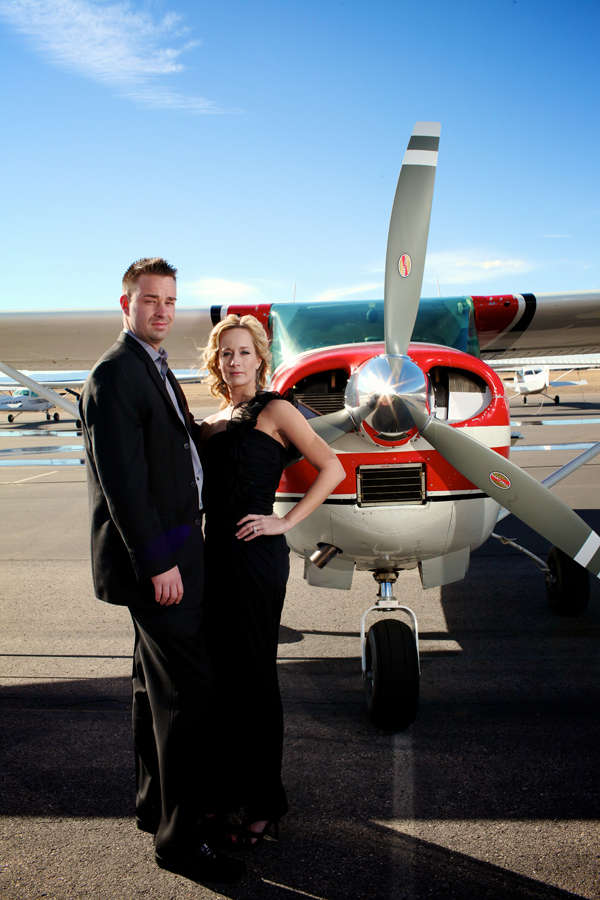 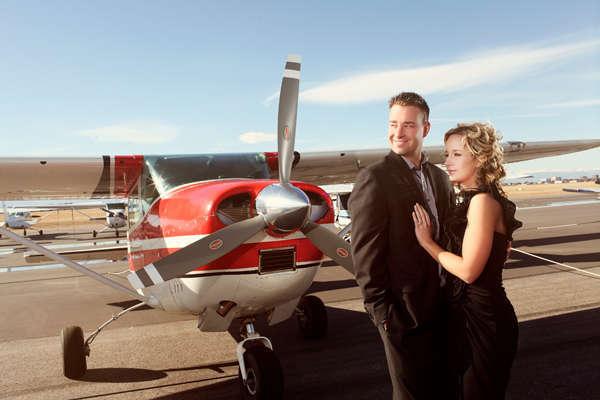 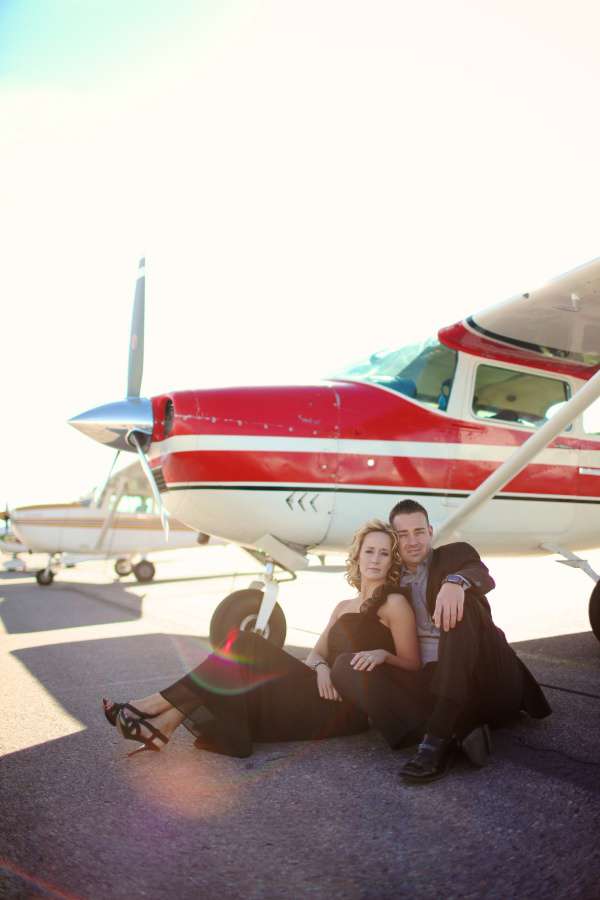 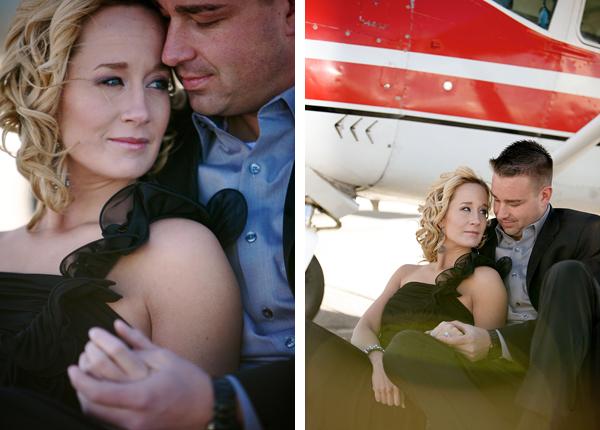 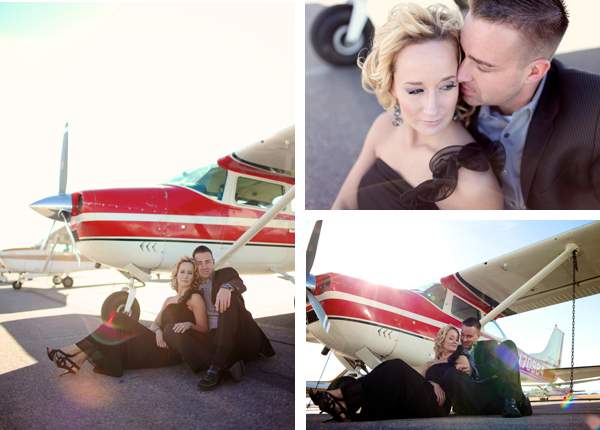 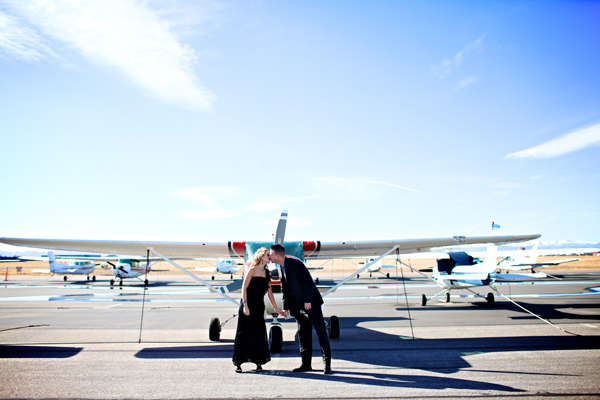 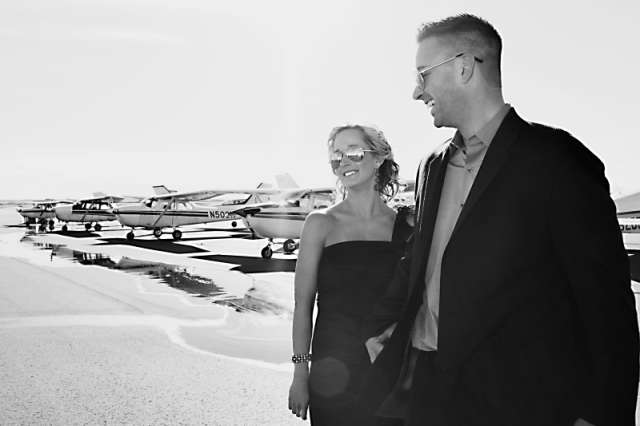 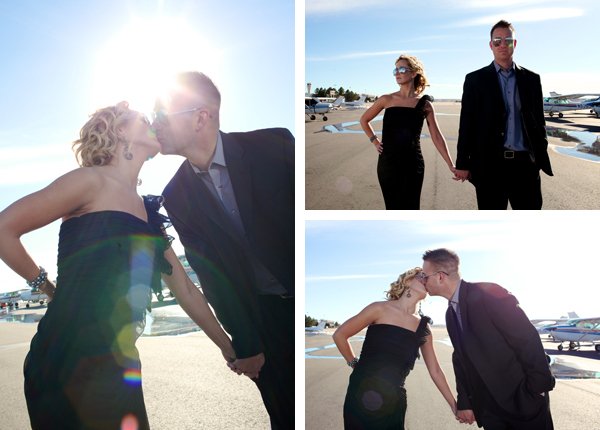 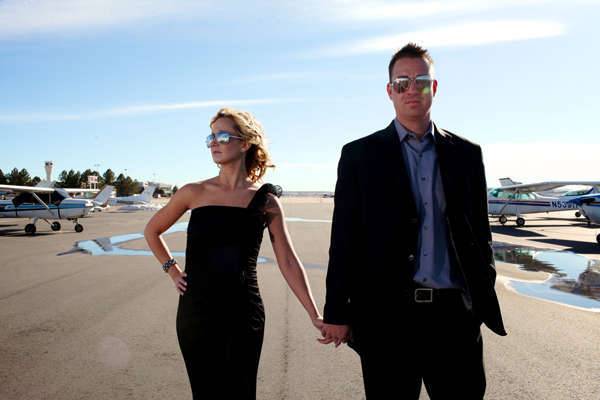 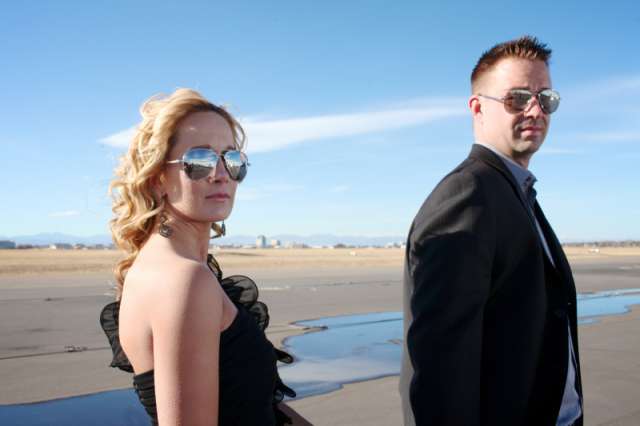 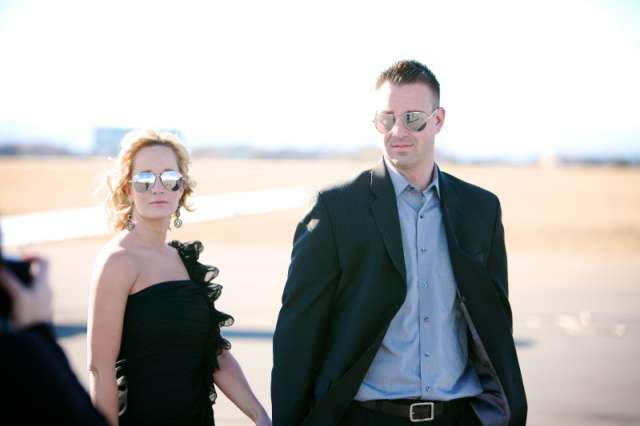 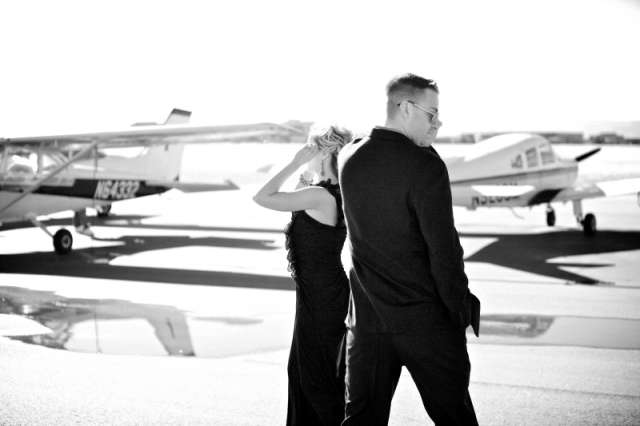 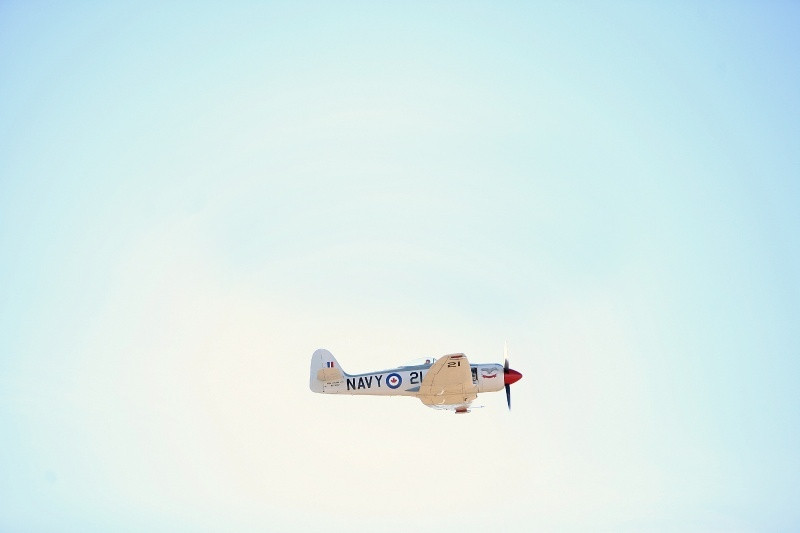 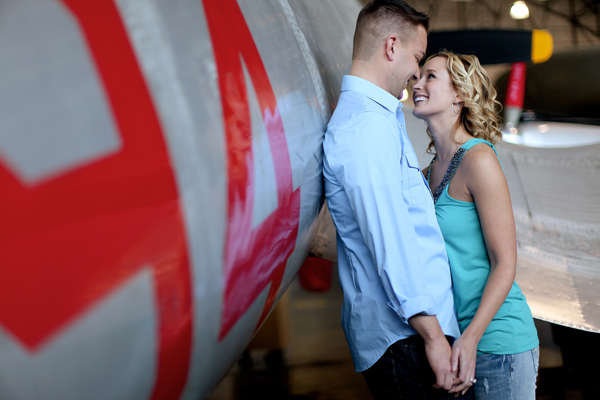 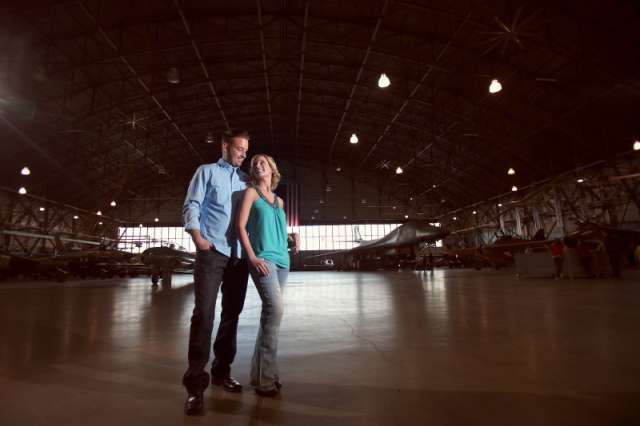 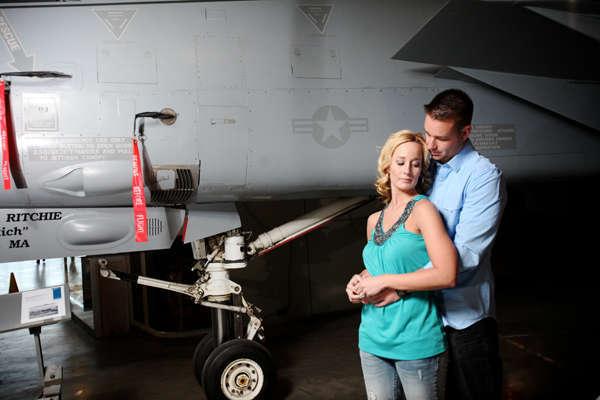 Carolyn Tells Us About Their Engagement
How did you two meet?
Chris and I met through our best friends who got married almost 2 years ago now. We had all hung out a few times before the wedding and we we paired to walk in their wedding together, because our friends knew we always had a ‘crush’ on one another. The problem was that at the time we both had significant others. The night of our friend’s wedding we confessed that we always had a thing for one another but nothing came of it for a few months, after we moved on from our previous relationships. Once we started dating, it was immediately obvious that Chris was the man I was gonna marry! And now we both can’t wait!

How did you know he/she was ‘the one’?
From the moment I met Chris he has always impressed me – every time I am around him my heart beats a little faster, and I can’t stop smiling! He is the type of man who brings you breakfast in bed, opens your car door, and tells you how beautiful you are every day. He is driven, hardworking, selfless, handsome, fun, and loving! I knew he was the one pretty much right away – I knew that Chris was not the type of man I would date, he was the man I would marry! He took me on a trip to San Francisco for one of our first dates, and we walked around Fisherman’s Wharf, had dinner, and flew home that night. After spending the entire day with him and feeling completely relaxed and having so much fun….that night is when I knew!

Please, tell us about the proposal!
Like I said above Chris and I went to San Francisco for one of our first dates. He is a pilot, so we have done a lot of spontaneous traveling throughout our relationship so far. In September of last year Chris and I had made plans to go to Seattle to visit one of his really good flight buddies. We had planned to leave the afternoon of September 11th because I was hosting my best friends baby shower, and also had my first soccer game for the little girl’s team I coach. Chris told me a few days before our trip that his friend had gotten us confirmed seats on an earlier flight because the flights were getting really full. I was NOT happy at all! I had to call my best friend and explain to her that I would be leaving the shower early, as well as I had to ask my brother to coach the soccer game alone.

I was quite upset with Chris telling him that I had to make all these sacrifices in order to make this day work! 🙂

My mom picked me up from the baby shower to take me to the airport to meet up with Chris. On the way, my phone rang and it was him. He sounded stressed and went on to tell me that our flight had been cancelled but we were flying to San Francisco for the afternoon, and then would leave for Seattle that night. I was SO ANGRY!!!!! I had already left the shower and was missing the game, and he didn’t even call me until now to tell me what was going on!

We arrived at the airport and he was standing on the curb waiting for me. I knew he felt really bad, and don’t get me wrong, I was upset, but there was nothing I could do about it now. I said bye to my Mom and we got on our flight and headed to San Fran. My mood also changed when I realized we were heading somewhere we both loved, and it was a beautiful day! Chris suggested that we go down to Fisherman’s Wharf and get a glass of wine and walk around while we kill some time waiting for our flight to Seattle that night~ so we headed down to the Wharf!

When we got down there we started walking around and then Chris suggested we should go to the pier where we took our first picture, and take one of us now! So….we headed that way. We got to the pier and started walking out and Chris stopped me and I noticed he looked kind of nervous:) He started saying how much he loved me and how he wanted to spend the rest of his life with me! As he was talking I kept interrupting him and saying ‘What’s going on’ ‘Why are you being so cute’ ‘Are you doing something?’ But he just kept on going! Then, he got down on one knee and pulled out the ring and asked me if I would marry him!!!!!!!!!!! I was so excited, and shocked! Of course I said YES and gave him a giant hug and kiss! Not to mention I apologized about a hundred times for being such a brat earlier that day!

Chris then went on to tell me that this whole thing was planned and that everyone knew and that we were staying in San Fran for the night and were going to Seattle in the morning! I was so happy, but so shocked that I had NO idea! We went to dinner on the Wharf that night and then stayed in an amazing room overlooking the bay! I have never been so HAPPY! I love him!

Anything special about the engagement shoot or why you chose the location you did?
We chose the airport and museum because of Chris’ job and our passion to travel the world together once we are married! We were not sure how the pictures would turn out, but our photographer, Dawn Sparks, is amazing and we could not have been more thrilled with the pictures!!!!

Proud to say Dawn Sparks is a mywedding member.