Vanessa and Lee’s engagement session features old trucks, an abandoned building and a whole lotta love. They’ll be getting married on their 10th anniversary together and I think their session captures a couple totally comfortable with each other, having a great time.

Vanessa and Lee’s engagement session features old trucks, an abandoned building and a whole lotta love. They’ll be getting married on their 10th anniversary together and I think their session captures a couple totally comfortable with each other, having a great time.

Vanessa gives us her thoughts on their session: We really wanted to do something different with our engagement photos.  I read wedding blogs almost everyday and love the vintage look, so we tried to incorporate our interests and things that represented us as a couple.  So, we pretty much told our photographer Chaz what we wanted as far as the vintage or rustic look, Lee’s interest in cars, and us loving sports and playing scrabble and he just nailed it when he chose the location.

Vanessa talks about how she and Lee met and gives the inside scoop on their wedding details below.
. 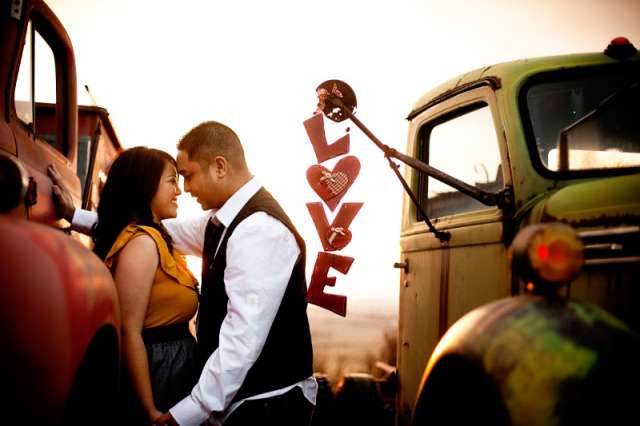 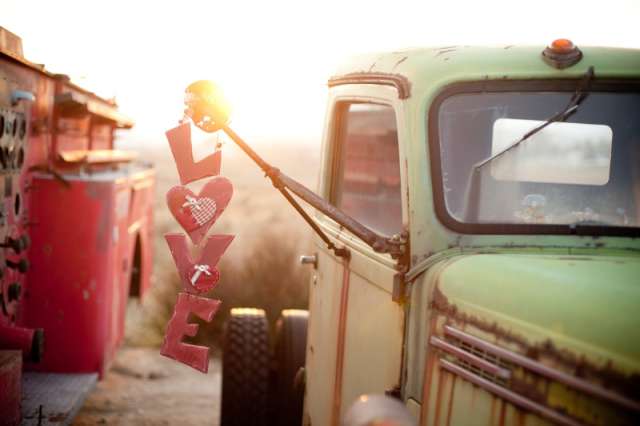 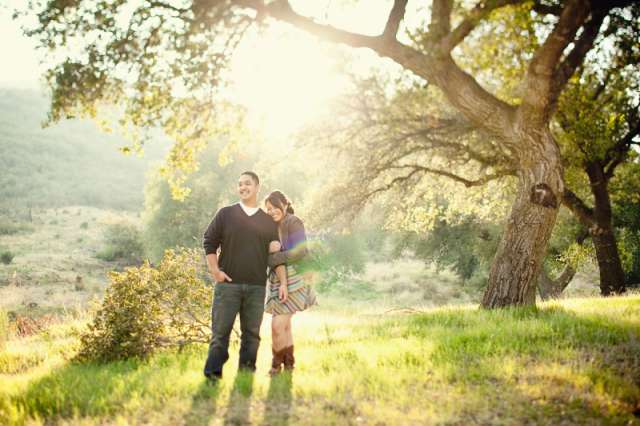 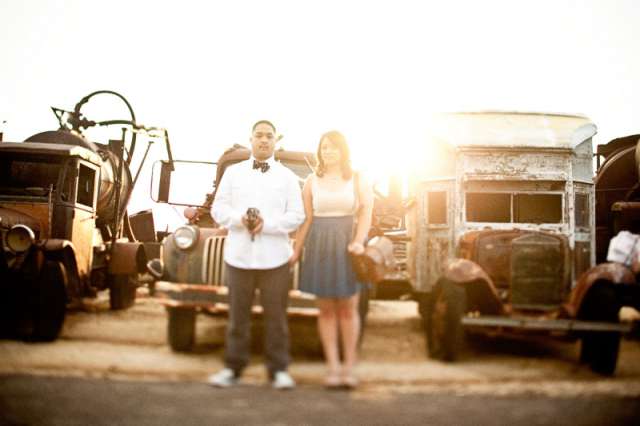 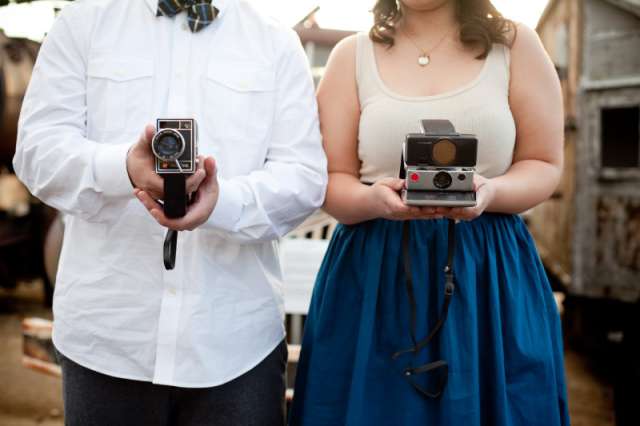 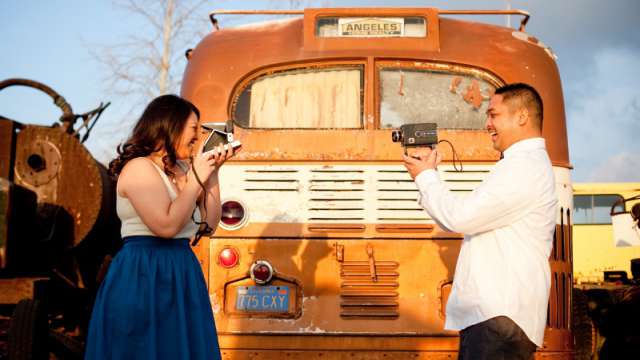 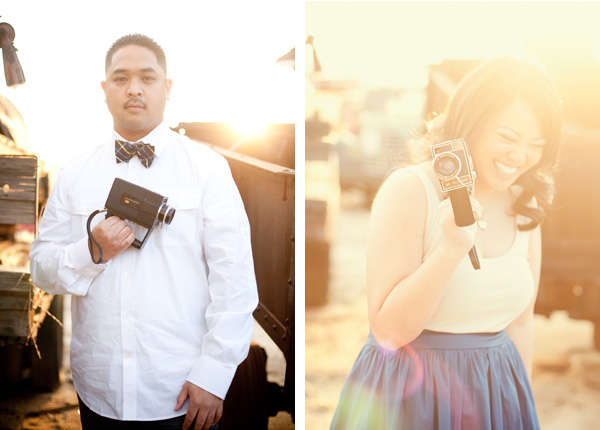 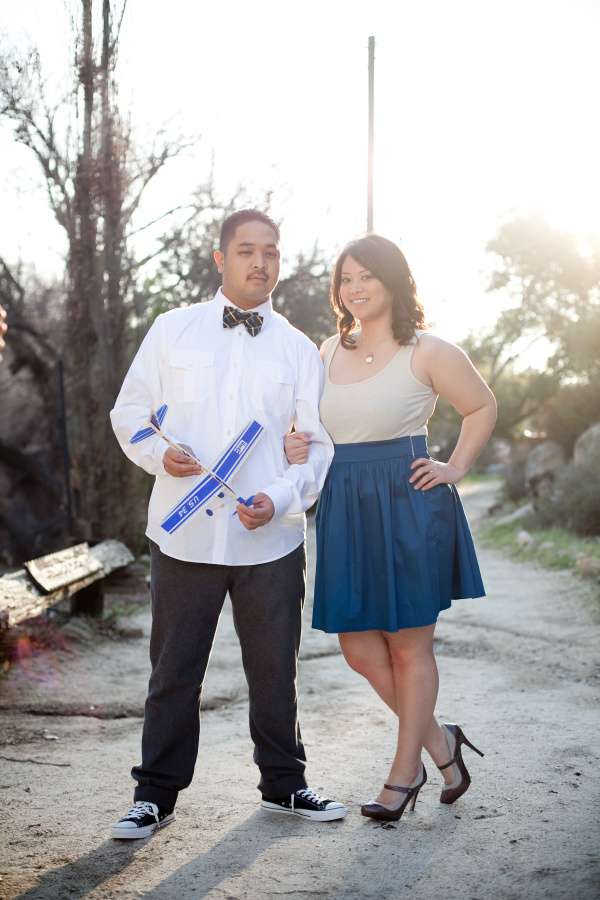 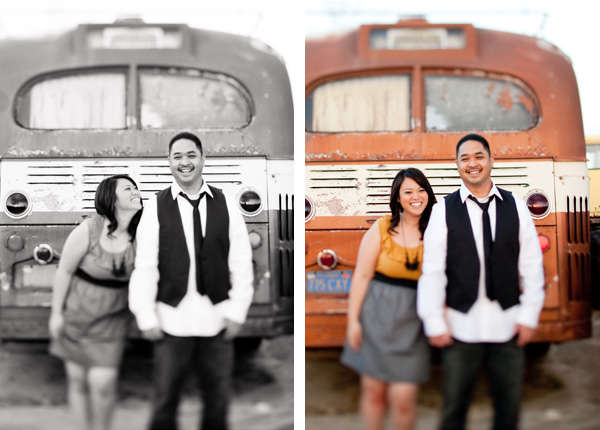 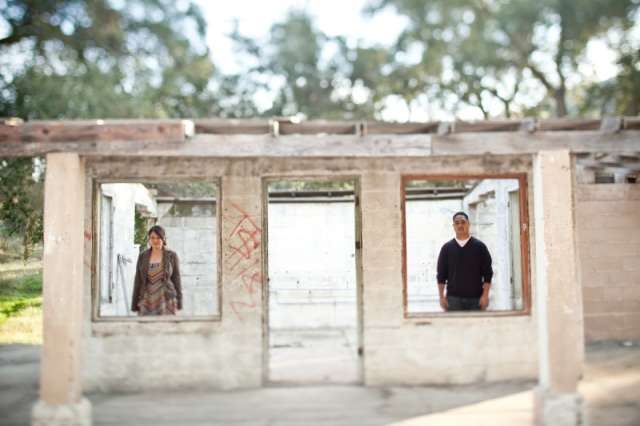 Vanessa’s Thoughts:
We’ve known each other since we were really little, playing outside and having sleep overs at my cousins house.  But at that age, you don’t really pay attention to boys or girls in a lovey-dovey sort of way.  Then years go by without us really seeing each other and one summer about 10 years ago me and Lee officially met.  And at that point we were older and clearly into each other.  We hung out every day that I was in Washington that summer and by the end of the summer we eventually became a couple.  I lived in Japan and Lee moved away to Phoenix, AZ and we had a long distance relationship for 3 years.  We had no idea where our relationship was going to go but after 3 long years we both end up moving to San Diego and have been together since.

We both can’t exactly pinpoint when we knew we were ‘the one’ for each other…he always tells people he just knew and I always tell people it was the first time he saw my reaction to the Chargers losing a game and he still stuck with me that I knew he was the one.  But really, we always just knew.

We had always talked about getting married and Lee finally after 9 years said I could go ahead and start planning for the wedding, even though he didn’t officially propose to me yet.  My cousin and I were checking out venues, but no one thought I was engaged since she had the ring and I didn’t.  I, of course gave Lee a hard time about not having a ring and about feeling embarrassed for looking at venues without having been proposed to because Lee hadn’t had a ring yet (so I thought).  Lee, being the nice guy that he is always trying to make me happy, already had a ring and was actually trying to come up with some master plan with my mom and my sister for some elaborate proposal, but because I always ruin surprises, he ended up proposing to me in our cramped up little room with just the two of us in our pj’s. (Which I prefer and love cause it was just us and I get embarrassed easily when we cause a scene.)

Our wedding will be at the Hard Rock Hotel in Downtown San Diego on our 10 year anniversary. We chose this location since we love downtown and the city lights and Lee is all about architecture and buildings.  And, the location just looks so fun.  The ceremony will be on the rooftop and the reception in one of the ballrooms with a great view of the Convention Center and Gaslamp Quarter.

The hanging LOVE sign we actually bought at Michael’s around the Valentine’s Day holiday. =)  But definitely shout outs to Chaz Cruz for the amazing photos and Judith Cervantes for hair and make up.